The Hindu Goddess Saraswati is often picturised clad in white clothes with a calm expression on her face. Sitting on a lotus, holding a book, a musical instrument(Veena), a water pot and a string of beads. The goddess of speech, learning, wisdom and art is Saraswati, pure and serene. “Brahmi” is another name for Saraswati. Brahmi, in powder or oil form, befitting its namesake, delivers immense benefits. 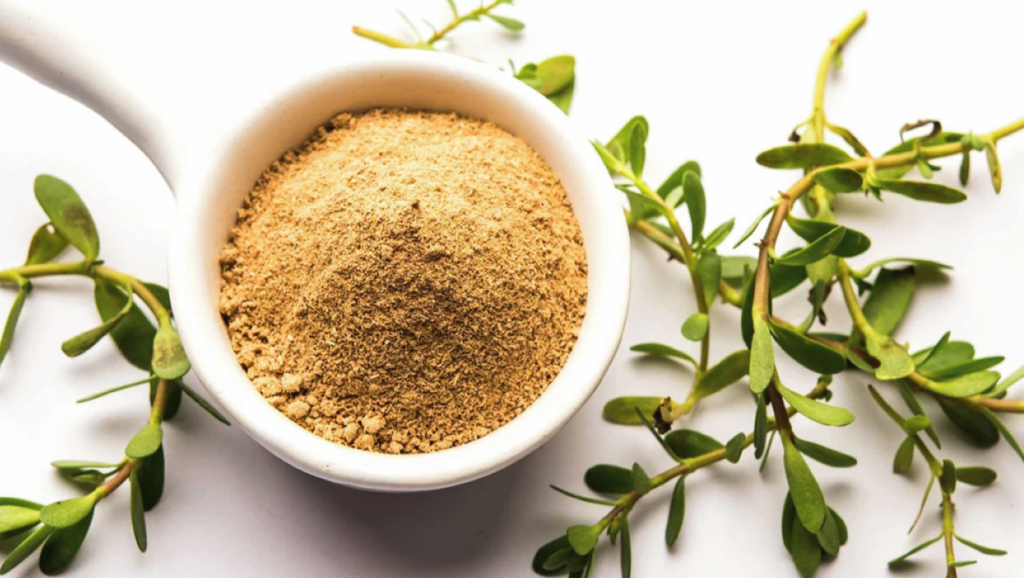 A widely used Ayurvedic herb scientifically identified as Bacopa Monnieri, it is small and perennial, with tiny oval leaves. Alternatively, another source for Brahmi is the Centella Asiatica with beautiful round leaves. These leaves, often referred to as “brain-shaped”, showcase the most popular use of the herb. The taste of Brahmi is astringent (similar to how eating a raw banana would feel like) and slightly bitter.

Brahmi as a brain tonic

As per Ayurvedic texts, Brahmi helps in pacifying all the three Doshas; Vata, Pitta and Kapha, and also acts on various target organs like the brain and heart. The most remarkable effect of taking Brahmi is on the nervous system. Consumed in fresh juice, powder or medicated ghee form, it helps in nourishing the mind as well as the body. Researchers have conducted several studies on the memory improving capacity of this herb and its potent activity in diseases like epilepsy and other psychiatric diseases.

The nootropic activity (that affects cognition in a positive way), could possibly be due to the enhancement of neurotransmitters and increasing blood flow to the brain. This in turn helps to provide oxygen-rich blood to the brain, improving brain function and memory.

An additional quality attributed to this herb is its antioxidant quality. But what does an antioxidant mean? Almost all activities that our body performs, along with external factors like environmental stressors, gives rise to free radicals. Extremely pervasive throughout the body, they have the ability to damage DNA, cell membranes and other parts of the cells. All this happens because of their unstable nature, and antioxidants, being as generous as they are, sacrifice electrons for these free radicals, making them stable in the process. Conducting several studies for this particular activity has helped play role in curing diseases like Alzheimer’s. Due to this free radical scavenging activity, it acts as a rejuvenator and nourishes the body in and out.

Prone to catching colds, acting as a mild emetic in children, it helps in eliminating excess phlegm when given in a prescribed dosage.

Action on skin and hair

The herb has a purifying action on the blood and is helpful in clearing out the skin in conditions such as acne. Due to its antioxidant nature, it helps in reducing the signs of ageing and is becoming a fast favourite as a skincare ingredient.

Due to its cooling nature, paste or oil processed with Brahmi, when applied on the scalp, provides a soothing sensation and conditions with the hair, making it shiny and lustrous.

Being an adaptogen, Brahmi helps in the rejuvenation of the body, physically and mentally. The main ingredient of several Ayurvedic formulations used as Rasayanas has a huge role in the cardiovascular system and its functioning. It is found to have a positive outcome as a hypotensive agent.

With all these amazing effects on the body, it is important to remember that one has to use one discretion while consuming it. The herb is best consumed after the digestive fire is improved using carminatives and might not show its best action in those with weak digestion.

This herb is slowly gaining popularity and is now widely available even in the form of a nutraceutical as well. However, being a medicinal herb, before consuming it in any form, one must do their own research, and talk to a medicinal professional if possible.

If you’d like to know about other adaptogens in Ayurveda, check out our article about Ashwagandha!